If people ever ask if Dr Naomi Harris has children she will smile and say, ‘I’ve got 45 of them!’

As a team doctor with Port Melbourne Victorian Football League (VFL) team, and previous team doctor for the Werribee VFL team, Naomi refers to the players as ‘her boys’.

“I’ve watched my boys go from being dopey 18-year-olds to professionals; they’ve finished their university degrees or they’ve gone from being the apprentice to being the site manager.  Some are even now playing AFL” Naomi says.

While Naomi’s role in the club is to primarily provide care for sport related injuries, the care she provides is holistic, often seeing many of the players and staff members at her clinic in Glen Iris, Melbourne.

“Often, in general practice especially, we complain that men are useless at going to the doctor….the male staff members are comfortable around me because I’m at the footy club and they come and see me as their GP and they start to look after themselves.”

Tough love is one of the hallmarks of sports medicine.

“I have to try to convince [the players] that an injury really is not as bad as they think it is…a lot of them get a bit scared that they’re not going to get a game or they’re going to get dropped if they get an injury. By having a closer relationship with them, I can be there for them.”

Despite having the experience and contacts in sports medicine, as well as a Masters of Sports Medicine, Naomi isn’t planning on leaving general practice behind any time soon.

“[The Australasian College of Sports Physicians] tried to convince me to leave general practice behind and do my sports physician training, but I said, ‘no’…I just really like my general practice as well.”

“Never in a million years did I think I would be working as a combat physician.” 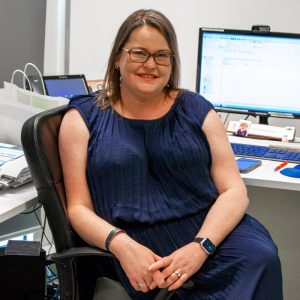 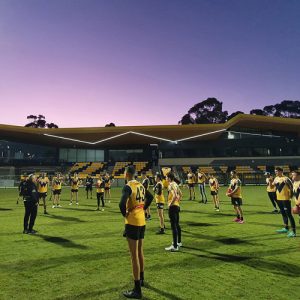 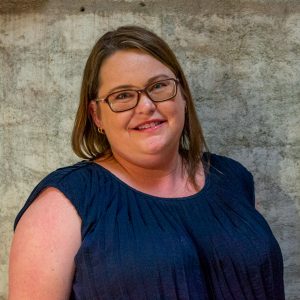 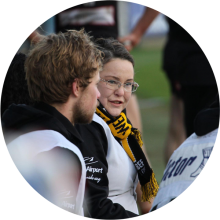 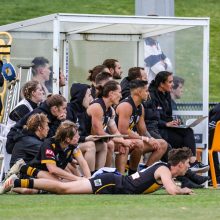 Naomi was asked to travel to New Zealand as part of her work as a combat physician with the Ultimate Fighting Championship (UFC).

“Never in a million years did I think I would be working as a combat physician,” says Naomi.

While there is no formal qualification to be a combat physician, a doctor has to show that they have the skills to manage the common injuries seen in a UFC match—concussion, lacerations, facial fractures and broken bones, especially in the hands and feet.

According to Naomi, the UFC is misunderstood by many.

“I certainly don’t condone violence…I think a lot of people don’t actually understand the levels we go to to make it as safe as possible.”

“The UFC is a sport that is controlled and there are professionals fighting in the presence of multiple medical professionals…serious injuries do not occur often because the athletes are trained to fight.”

There are seven medical professionals on-hand at each fight, each with a distinct and important role; Naomi is responsible for the post-fight check after a handover from the doctor working cage-side.

For Naomi, being a combat physician is like running a mini emergency department.

“The bleeding can look horrific and sometimes I think, ‘Oh, my God, what have they done?’ And then we get them out the back and see that because it is a cut on their head it bleeds a lot.”

“You wipe it down and clean it up and it only needs three stitches. I can understand why some people can’t
watch it.”

The pre-fight check-ups are another enjoyable aspect to the role; Naomi has formed bonds with some of the athletes.

“I’m not just doing this for fun. I’m putting the athletes first, and if it means delaying a match, then it gets delayed.

With a diabetes diagnosis at the age of four, Naomi found herself immersed early in the healthcare system.

“Right from when I was five years old I thought I was going to be a paediatrician…I wanted to work at The Royal Children’s Hospital because so much of the management of my diabetes was there.”

But with a great GP role model, through the John Flynn Placement Program, Naomi sided with general practice.

“My mentor just had such an amazing relationship with his patients and they knew him and they respected him, not just as a doctor, but as a person.”

“We would wander over to the supermarket at lunch time and his patients would be happy to see him and say, ‘Oh my God, I got a new granddaughter’. It wasn’t just about medicine, it was about their whole life.”

“Knowing the background of your patient actually helps your consultation.”

Naomi has taken this approach to her own practice.

“Yesterday, one of my patients came in and I said, ‘Has the new grandchild arrived yet?’ And she said, ‘She went into labour early,’ and so we had to catch up on that before we got into what she had come into the clinic for.”

“Cradle-to-the-grave care is what I really like about general practice. I’ve got a little girl who is ten years old and she’s about to go through puberty…I’ve known everything that’s happened from when she was two years old.”

As a practice owner and manager, Naomi can shape her practice as she wants—as the sole doctor in the clinic, supported by allied health services, she can tailor the practice hours around her other commitments.

“My dog comes into work sometimes and cheers up everyone in the waiting room. If it wasn’t my practice, I couldn’t do that.”

The fear many doctors have, Naomi explains, is that they will be stuck being a GP in a metropolitan area and just end up referring everything—that all the exciting medicine in general practice happens rurally.

However as a GP, Naomi has more flexibility to pursue a variety of interests—both clinical and non-clinic. As well as sports medicine, she assists an orthopaedic surgeon in theatre, works half a day a week out of a physiotherapy clinic, and is on the Board of the Victorian Doctors Health Program.

Naomi advises aspiring doctors to not cross general practice off the list, nor leave as a “just-in-case” option.

“It is not all coughs and colds, blood pressure and sick certificates…I seriously think in the last two days I’ve written one medical certificate and I’ve had two patients get blood pressure tablets. It’s so much more dynamic and it can be whatever you want it to be.”

“There are so many different courses and extra skills that you can do as a GP, and you can really tailor your practice to what you want to do. General practice is massive.”

Naomi advises aspiring female doctors not to worry about the cliché of getting stuck with the “tears and smears” patients.

“You get the most amazing chance to build rapport with your patients and actually help them with things that they didn’t know they could improve.”

“There are so many different courses and extra skills that you can do as a GP, and you can really tailor your practice to what you want to do. General practice is massive.”