Dr David Lam: a specialist in life...and a teacher, boxer, guitarist and DJ

For South Australian GP registrar David Lam, general practice provides the flexibility to have a life outside of work, and his job in rural Port Lincoln has no shortage of variety.

I wanted to study jazz. I felt no greater joy in life than playing guitar – anything and everything from John Coltrane to Red Hot Chili Peppers.

But it’s no secret that most musicians require a stable job in addition to the sporadic work that comes from playing gigs, so when an offer came up for medical school, I decided to give it a go.

I continued because medicine is fascinating.

Bad things happen to the human body all the time, yet it seems to just want to fix itself if you know how to help it along.

But the music never left me.

For a decade, medicine and music battled in me like Jekyll and Hyde. When I was an intern I’d play a gig with my band, Spanish Harlem, or DJ a party with my crew, Lam Bros Disc Jockeying, and then have to jump straight in the car for an overnight shift at the hospital.

I kept trying to convince myself that music was silly and I would “give up for real” in the next year.

But I kept writing songs and people kept wanting to see us play, so I pushed on.

As an intern I was initially interested in surgical training, before realising that there just weren’t enough hours in the day to be in theatre and be on stage.

General practice was just right. The clinic hours meant a certain amount of predictability and flexibility, and more and more I found it to be the perfect specialisation for me.

Both engage my desire to learn new skills – to watch what someone else is doing and think “that’s clever, let’s find out how they do that and give it a go next time.”

Being able to read people well is essential to both too.

As a GP, one of the best ways to help people is to sit back, shut up and listen to the patient.

Likewise, as a musician, I am constantly reading the crowd. I am observing to see whether they are singing along, whether they are dancing, and constantly checking for that look of rapture in their eyes in order to figure out what to play next and how to play it.

In both jobs, reading people works far better than pushing my own clinical agenda or musical taste down their throats.

As a professional musician, I travel to and from Adelaide to play anything from Back in Port Lincoln, I am also the club doctor for the Port Lincoln Boxing Club and a primary carer for the Marble Range Netball Club. Because sport is awesome.

I also teach final year medical students on rural rotations and first-year students at the University of Adelaide.

Are there busy days? Plenty. But I wouldn’t have it any other way. Each of my roles defines a different part of me and is a unique way to do good in the world. And most importantly, all of the above experiences make life fun. 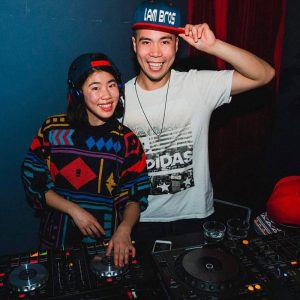 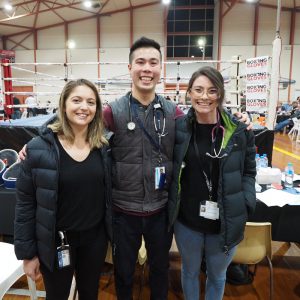 Variety is the spice of rural GP life

In Port Lincoln, we don’t have resident hospital doctors, which means I work in the local hospital and emergency department as well as in my clinic.

This makes my job both challenging and exciting. If someone gets horribly unwell in the clinic, I’ll call an ambulance. However, contrary to metropolitan general practice, I will then follow the ambulance in my own car and continue to treat the patient in hospital.

Rural GPs sort out so many different types of problems – stitching up wounds, catching babies, fixing broken arms and cutting out skin cancers.

Outside of rural general practice, there are few other jobs where you have the privilege of serving several generations of the same family simultaneously.

One day I was an obstetrician, delivering a patient’s baby. The next day I was a paediatrician, treating her sick toddler. The next I was a general physician, looking after her elderly mother in hospital.

I initially worked in Port Lincoln as a student, and when I came back as a registrar I was reunited with one of the babies I delivered five years earlier. He was all grown up and I had the privilege of continuing to look after him.

Building partnerships with Indigenous patients to improve their health is also hugely rewarding.

I worked with one Elder for 18 months before he finally agreed to take insulin for his diabetes.

Ultimately, it took the both of us injecting ourselves at the same time (me with a placebo) in order to convince him that the needle didn’t hurt.

He brought in his sugar-monitoring diary last week and had written next to the improved numbers “feeling better, thanks Dr Lam!”

Natural beauty and a sense of community

It’s also been great to support the local community as club doctor to the Port Lincoln Boxing Club, where I also train.

My coach, Pete Williams, is like a father to me. He proudly travelled 700km from Port Lincoln to
Adelaide to watch me graduate some years ago. Many of the boys and girls at the club are from broken homes and don’t have the money for club fees, but he takes them all in and treats them like his own kids.

Another benefit of working in this area is the abundant natural beauty of South Australia’s Eyre Peninsula.

There are very few other places where I could clock off, drive ten minutes down the road, and be lying on a deserted beach, hiking amongst breathtaking mountains or playing in sand dunes as far as the eye can see.

The challenges of working as a rural GP registrar

Of course, working rurally isn’t without its challenges.

In Port Lincoln, we are but twenty doctors divided amongst a population of 15,000, not including people from surrounding towns who travel in for medical care.

Waitlists to see a specialist are several months long, and our small mental health and drug and alcohol services are crucial but overwhelmed.

As a result, I am often frustrated by being unable to provide someone in the country with the same services and standard of preventative care that someone in the city would receive.

The lack of resources can also take a personal toll.

There are plenty of sleepless nights when I am on-call at the hospital, and the sheer amount of hours I put in as a country doctor means that I often have less time to spend with my incredibly
supportive and patient girlfriend.

Then there’s the pressure of having to juggle work with after-hours study for the RACGP fellowship exams.

This combined with flying in and out of Adelaide to perform with the band or DJ crew has led to many stressful moments. 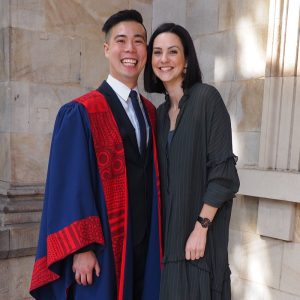 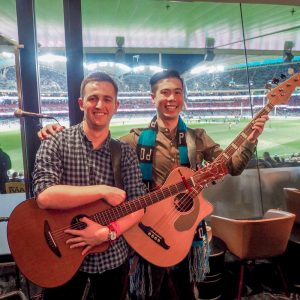 I will always do clinical work as a GP.

I want to continue working in the country (at least fly-in fly-out) as there is still such a great need for healthcare out here. I dream of setting up more mental health programs for teenagers and young adults in rural areas.

In addition, I am going to keep teaching with the university. I am keen to coordinate programs for students in rural areas and in the near future I will undertake a Masters in Medical Education.

And, of course, I aim to keep boxing and to continue playing guitar and DJing.

My band recently made our first music video, which was released on Triple J Unearthed, and I want to be playing big-name festivals next. I want to write a song that makes it on the mainstream Australian charts.

I also want to travel the world, experiencing the music of different cultures in order to inspire my own song writing.