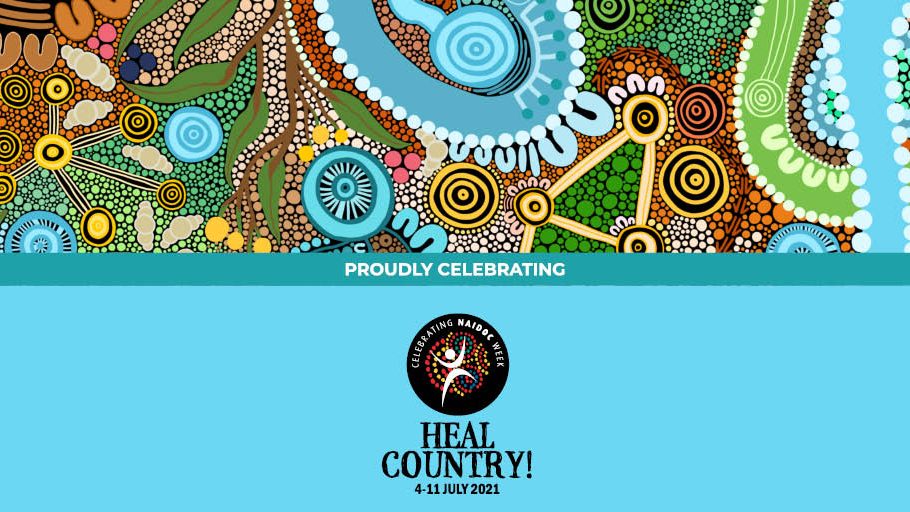 NAIDOC Week is an opportunity to come together in honouring the history, achievements and culture of Aboriginal and Torres Strait Islander people.

The theme for NAIDOC week is: ‘Heal Country!’.

What is NAIDOC Week?

During NAIDOC Week, all Australians are invited to come together in celebration of Aboriginal and Torres Strait Islander people, culture and history. Organisations around the country host these activities to show their own support, creating fantastic opportunities to be involved in local events that highlight the diversity and achievements of Australia’s First Nations. Wherever you are in Australia, there’s sure to be an event near you!

The centrepiece of NAIDOC Week is the annual National Awards Ceremony, hosted each year in a different city. NAIDOC Week honours individuals around Australia by recognising achievement and significant accomplishments across 10 different categories, such as Artist of the Year, Person of the Year, and the Caring for Country Award.

The 2021 National NAIDOC Awards Ceremony is postponed until later in the year following the initial cancellation of the Mparntwe (Alice Springs) in-person event due to COVID-19. See more information on the NAIDOC website.

What is the history of NAIDOC Week?

Early Aboriginal organisations in the 1920s and 1930s, including the Aborigines Progressive Association and the Australian Aborigines League, sought recognition for the rights of Indigenous people, but were frustrated by a lack of progress.

A pivotal moment occurred on Australia Day in 1938, also known as the “Day of Mourning,” where Aboriginal protestors marched through Sydney and held a meeting in Australia Hall on the 150th anniversary of the arrival of the First Fleet.

Following this, support continued to grow for a regular gathering each year. The annual event was held in various forms between 1940 and 1991, a period which included the creation of the National Aborigines Day Observance Committee, or NADOC. In 1991, the committee settled on its current name, and became the National Aborigines and Islanders Day Observance Committee, and the modern NAIDOC Week was born.

NAIDOC Week continues to flourish in 2021, and the organising committee now consists of representatives from across the country.

How can I get involved?

NAIDOC Week is all about participation, so head over to the events page to find local celebrations near you throughout the week! See a list of NAIDOC Week Events.

You can also learn more about the History of NAIDOC Week here.

NAIDOC Week activities in 2021 are centered around the theme, ‘Heal Country!’. This year highlights the profound connection of Aboriginal and Torres Strait Islander peoples with land, reflecting tens of thousands of years of interdependence of people and Country.

GP trainees often move frequently during the course of their training to gain a wide variety of experience. To get involved with this year’s NAIDOC theme, think about researching the Traditional Owners of the lands on which you live and work, and integrating a Welcome or Acknowledgement of Country at formal meetings and events. If you’re not sure where to start, seek out information from your local council or regional Indigenous organisations.

Although many in-person events are not proceeding this NAIDOC Week, there are still plenty of online opportunities to celebrate and learn. For instance, check out the online events being hosted by Monash University in the coming days.

There are many ways to be involved in your day to day practice as well, and GP registrars can refresh their knowledge on Aboriginal and Torres Strait Islander Health with the clinical resources below: